Long before the Mohalla clinics came into vogue, the annual Ramlila played out in almost every alternate street of the capital used to be the most popular mohalla activity half a century back. What a social event it used to be with families from all walks of life, irrespective of caste, creed or religion participating whole-heartedly in the event.

Fun-time especially for the children where local talent used to get ample chances to showcase their lack of acting abilities. However, the major protagonists used to be mostly re-casted year after year. I vividly remember the tall and bulky teenager Ali being pulled out of obscurity every season to become Bajrang Bali for those unforgettable ten days, more for his airframe matching and less for the faint rhyming of his name with that of the most popular character in the show.

Yes indeed! Lord Hanuman with his naughty and mischievous ways used to evoke mirth and laughter like no one else could and was our all-time favourite. His presence on the stage used to be our let-go event and ‘Lanka-Dahan’, burning of Ravana’s empire with his tail used to be always a full-house show.

Hanuman with his mythological windy patrimony, ideal combination of “strength, heroic initiative and assertive excellence” and whole-hearted devotion has always been considered the ultimate ‘bhakt’. Of course, not in his wildest dreams would have Hanuman thought that he would be rediscovered in the Kalyuga as a mascot for pre-election polarisation rallies.

Actually on second thoughts, with his unique qualities of unquestionable loyalty and an appearance in saffron cladding, he quite fits the bill for what the political class are desperately seeking today i.e blind followers.  And lo behold! Hanuman statues, Hanuman Jayanti rallies and social-media forwards have suddenly sprung up en-masse to lay claim to his venerated legacy.

Hanuman flew over the legendary stone-bridge to devastate Lanka but it takes just a couple of stones thrown at the Pavansut (Son of the Wind) yatra by paid pelters to devastate the harmony of the nation. Edgy is the milieu, communal become the riots and apparently consolidated become the perceived vote banks; exactly what the doctor ordered.

While the doctors are busy attending to the injured in the Government hospital, interesting is the scene at the local police station. Rahim is part of the fifty odd miscreants who have been rounded up by the SP and his staff, post the last night’s riots. Dishevelled, reeking of country liquor, unshaven and unbathed, Rahim with his hand bleeding from the recently acquired injury during the skirmish appears to be the true embodiment of ‘uncouthness’, if there ever was any such word in the dictionary.

The word has gone around that the Boss man is very strict and no one will be spared this time. “But it all depends upon your religion, brother”, whispers his buddy Aman seated beside him on the ground, whose name ironically means peace and tranquillity. He too is nursing a head injury with a dirty bandage swathed around but does not appear to be too badly hurt.

Cries from within the building are heard with a mixed sense of dismay, fear and inevitability as the obvious treatment is being meted out. Rahim puts on an outward brave look as he wants his turn to come fast but Aman has thrown another spanner around this time, “ Bhai, I have heard they are slapping Section 158 charges. We may have to go inside this time for at least six months or maybe a year.”

This going inside part, Rahim had not bargained for this time. After all, he had a family of four to feed.  Wondering what to tell the constables when his turn comes, he goes into a stoic slumber. There is nothing much he could think off with an empty stomach and a parched throat.

“Next!”, roars the baton-wielding junior constable who is in his element today with his positional power in full display. Aman nudges Rahim, “ Bhai, your turn”. Not exactly knowing which God Rahim worships if he ever does, he wishes him well, “May He look after you!”

Rahim trudges inside with a haggard gait. He is rudely woken from his daze by a welcome bamboo-whack on the backside along with side dishes of some choicest expletives by half a dozen specialists eagerly waiting for him. The inescapable treatment starts off in right earnestness. Yelling and crying at the top of his voice, Rahim clearly in excruciating pain, creates quite a scene but the specialists are not novices to the game. They have their orders very clear.

“Will this ever end?” wonders Rahim that he will be lucky to come out with just a couple of broken ribs. And what about the ‘going in’ part? That suspense is killing him more than any other thing. The ritual continues and suddenly the Sr Deputy enters the room, “ Hey stop guys! I think I recognize this guy. We caught him last month as well during the Muharram riots. That time he was creating a ruckus for the other party. Bring him to my room.”

“I have been singled out for the special cure”, Rahim is convinced of the impending misery as he is dragged into the Deputy’s office.

“Voh kya dharam hua?”, meaning what religion do you belong to, asks the Deputy.

“Sahib, bhookh ka kya dharam? Meaning hunger has no religion, as he hangs his head down low.

Loosely translated to, “Whichever party gives us 500 Rupees and a meal, we create ruckus on their behalf. After all, I have two children to feed. Nowadays there is no work, so I have chosen this form of employment for survival. Please whip me till my skin comes out but don’t send me to prison. For then, I will lose this job as well. It will be a great favour”.

Known to be the cruellest in his trade, the Deputy surprisingly melts for no apparent reason and roars in self-indulgent laughter, “Secular hai sala! Char ache aur lagao aur warning ke saath chod do.”

Meaning “ This guy is truly secular. Give him four more solid slaps and let him go with a warning.”

Coming outside, dusting his clothes and tending his wounds, as he approaches the market place with the temple to the left and the mosque to the right, he is not sure which side to turn to express his thanks to the Almighty for being let off so easily.

As Aman catches up with him, a relieved Rahim instead continues straight and looks up thoughtfully to thank God for his mercy.

“I don’t know where you reside but you definitely exist for sure.”

First published at seekmediation.com on 17/04/22

previous
The Original Sin
next
Truly Secular: A Worthy Response 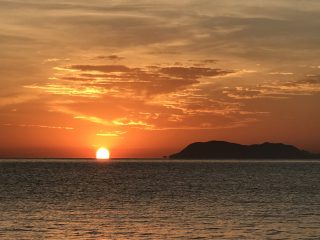