The tweet from Punjab caused quite a furore on social media for creating regionalism and parochial factionalism. Amongst the trolls, an amusing but spot-on response was:

“Yes, Captain, we are proud of Rohidas of Odisha who pushed the ball to Lalit of UP who drag-flicked it to Sanglakpam of Manipur who dribbled it to Prasad of MP who scooped it to Sreejesh of Kerala who drove it to Dilpreet, Gurjant, and Hardik, all of Punjab, who scored. Jai Hind.”

The Punjab CM was of course, not alone. There were similar transmissions from the highest echelons from each state whose players were fortunate to be on the Olympics podium this time.

While we smilingly forgive the politicians for doing what they are best at, I guess each one of us also wants to be a part of the celebrations by means of affiliation, which is nothing but a form of inclusion. Affiliation by means of gender, caste, service, arm, regiment, state, city, village, school, dietary habits and even hair styles, nothing escapes our mind.

At a subconscious level, when we applaud the achievements of our players, undoubtedly there is excitement, joy and relief. However, when we affiliate and associate, probably a small part of us also wants to take a tiny credit for the success of the main protagonists.

And that is perfectly fine as it provides us a pervasive sense of goodness and well being, if not the sprinkling of stardust we hoped for. It also helps us to become better human beings who, should the opportunity ever arise, would not mind aiding others to achieve their dreams.

However, while on one hand we rejoice and motivate our players to give their best, on the other hand we shockingly get to hear this: 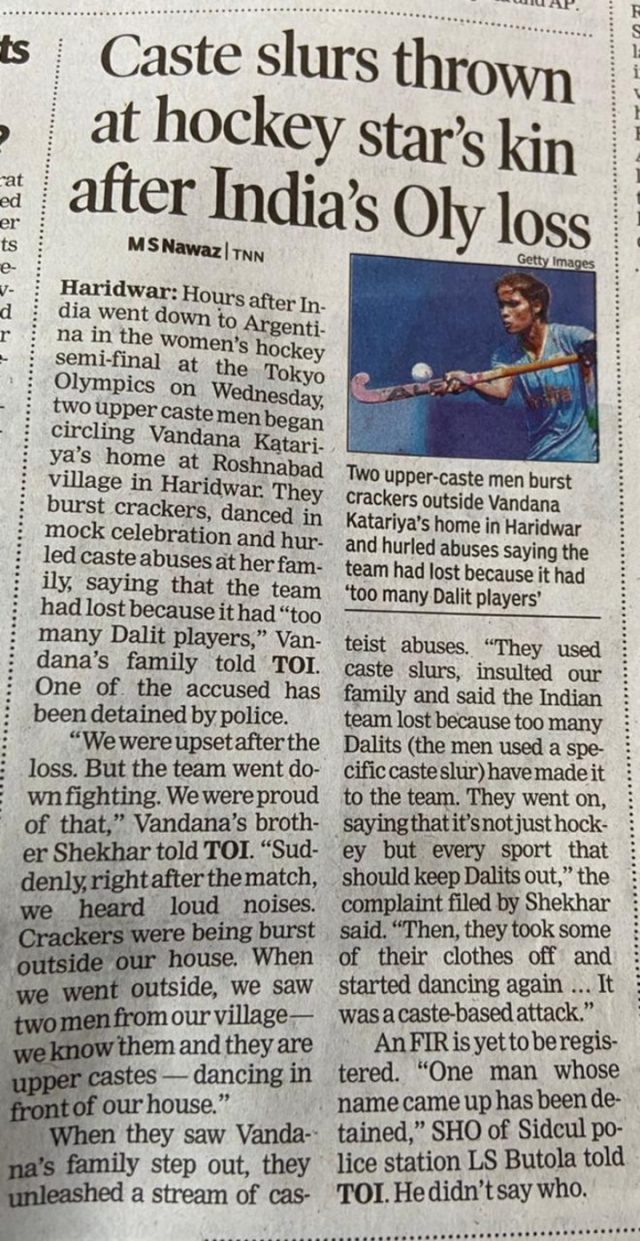 While a couple of depraved vagabonds will be caught and thrashed for their disgraceful act, most likely they will escape the hand of the law by claiming that they were in fact celebrating the player’s success by bursting crackers. Some local politicians will also probably step in to assuage the hurt by some offerings for fear of losing votes.

However, I move beyond. The act in itself may look petty and worth dismissing as a one off. However, it is truly reflective of the social prejudices that we continue to revel in even after 74 years of independence and multiple lame attempts at social engineering. We don’t think twice before converting a ‘hero to zero’!

Many more medals will surely come in the years to come, but in a certain marathon, there are miles to go before we sleep. Let us therefore spare a thought for the odds this brave girl and many of her kind must have battled beyond the playground and that too over the years. These girls were winners even before they left the shores of the country.

So let us as a nation collectively affiliate once again, bow our heads down and take a bit of credit for this dastardly act as well.

Happy with a tinge of……,

First published at seekmediation.com on 09/08/21

previous
Enough is Enough
next
A Glass Half Full